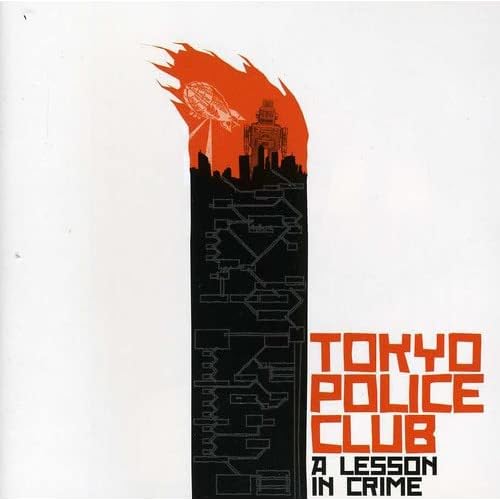 Release Notes
If there were ever a movement for an indie farm
system, somewhere to designate those young, raw
bands needing more time in the oven, Tokyo Police
Club would be the poster children. This
blogger-approved Toronto quartet has the potential
to become a real five-tool player in indie for a
long time; Pretty Girls Make Graves' agility, Les
Savy Fav's curveball, the Strokes' sweet swing--
there's no questioning the latent talent here.
Strangely, most bands follow a developmental arc
similar to those of professional athletes. Just as
the minor leagues help hone those nascent all-star
skills, there's almost an unwritten rule that bands
should become road-tested to refine their
power-chord angst into slick, nuanced songwriting.
Without even knowing Tokyo Police Club's ages, you
can hear the greenness in their excessive
handclaps, their ham-handed sci-fi narratives, and
their opening alarum, "Operator, get me the
president of the world!" The band may have spawned
some of these tracks from a bored biology class
daydream, but when they're on musically, the
post-adolescence imbued in their sound doesn't even
matter.

For all the raging hormonal awkwardness, the Club
knows how to self-edit like the most scrupulous
adults. The seven songs here contain no extra
gristle, each weighing in around a svelte two
minutes. Even tighter are the twitchy micro-Strokes
riffs adorning tracks like "Cheer It On" and
"Nature of the Experiment". Frontman Dave Monks
even apes Casablancas' vox-via-megaphone a bit,
though with more nasal, less growl. The Strokes
comparisons only hold for so long though as the
EP's second half forks off into Pretty Girls/Q and
Not U hyper post-punk and straight-laced emo.
"Shoulders & Arms" demonstrates the band's ability
to pull off the former, a bustling juggernaut of
stratospheric guitars and squalling synths.
Meanwhile, "Citizens of Tomorrow" headlines the
emo-minded selections, swelling to a futuristic
climax that's three parts Sunny Day Real Estate,
one part Sparta.

While for now any genre may be their oyster, I hope
these guys stick to the prickly garage rock
prominently featured early on the EP. Not only do
they do it best, but the cushy-sounding stuff
closing the release lacks the idea density of the
rest of Crime, and choosing to pursue more of this
ethereal fluff could result in an overblown LP
letdown not unlike that of Rahim's or the Chinese
Stars'. Either way, we-- and the rest of the indie
rock world-- are waiting and listening for their
next move.
Download
2006 - A Lesson In Crime (320 CBR) Release Notes
The gentlemen of Tokyo Police Club grew up dreaming of rock
stardom—playing air guitar, lip syncing to songs in front of
the mirror, and practicing interviews before bed.

One fateful day, Dave, Graham, Greg, and Josh decided to
learn some instruments and write some songs. It took a few
years and a few bands before the four friends created Tokyo
Police Club. The first ten shows or so attracted crowds of
friends and parents. There were plenty of cupcakes to go
around. Soon a reputation for infectious songs and exuberant
live performances added to the decadent baked goods and an
unstoppable musical force was born.

After a Pop Montreal showcase, Tokyo Police Club made some
new friends: Toronto’s esteemed Paperbag Records. Surprised
by their good fortune, but intent on turning out a stellar
collection of songs, the boys worked like madmen, spending
their days working ‘real jobs’ and their nights banging out
tune after tune. The band hit the studio with Jon Drew, and
after three long days, staggered back into the harsh
sunlight clutching their new EP: A Lesson in Crime. Clocking
in at a mere 16 minutes, A Lesson in Crime hits like a
tornado, from the thunderous drums of “Cheer it On” to the
cathartic screaming coda to “La Ferrassie.” The EP is a
relentless barrage of pummeling bass and drums, stabbing
keyboards, and sheets of delayed guitar, peppered with
furious handclaps and lively group vocals.

Released in the United States and Europe, the EP received a
glowing review by Rolling Stone, “If only all young guitar
bands were smart enough to rock out this fast, banging out
seven first-rate mod-punk party starters in barely more than
sixteen minutes.” Then came NME, “Tokyo Police Club are a
bold, inventive, brilliant band, And that’s the absolute
truth,” and Pitchfork, “This blogger-approved Toronto
quartet has the potential to become a real five-tool player
in indie for a long time; Pretty Girls Make Graves agility,
Les Savy Fav’s curveball, the Strokes’ sweet swing—there’s
no questioning the latent talent here.” Whether playing in
small clubs or at massive festivals like Glastonbury or
Coachella, Tokyo Police Club is known for boisterous live
shows that manage to exceed the joy and energy of their
recordings. The boys have spent the past year touring with
bands like Art Brut, Cold War Kids, and Enon. Their first US
headlining tour kicks off on July 17.?

We could go on and on about how A Lesson in Crime stayed on
the Canadian College Charts longer than any other album
released in 2006 or about how “Nature of the Experiment” got
a stranglehold on mainstream Toronto radio and refused to
let go, outlasting serious competition like Red Hot Chili
Peppers…or about how the video for “Cheer it On” won a
MuchMusic Video Award in 2007, resulting in one of the most
awkward acceptance speeches in the program’s history. We
could go on…and on…and on…but, at the end of the day, the
important thing is that these four friends are doing just
what they always dreamed of—making something special. They
are writing and performing music that draws people in, music
that demands attention. Listen to the songs. Can rock
stardom really be that far away?

Release Notes
Catapulting from the unknown with last year’s ‘A
Lesson In Crime’, Tokyo Police Club rapidly
gained a reputation for infectious songs and
exuberant performances. Across the nation and
abroad, these boys stole the show at festivals
and club dates alike, commanding main stage at
Coachella, Lollapalooza, and bumbershoot, to name
a few. The year was spent tirelessly touring with
Cold War Kids and Art Brut, among others, thus
garnering legions of ardent followers. What do
these devotees demand? More Tokyo Police Club!

Smith is here to fulfill the demand. Four songs
and three videos, this is a piece essential to
every TPC fan. From the vaults: two UK 7” vinyl
B-Sides, ‘Box’ and ‘Cut Cut Paste’ (also found on
the 12”). Next, ‘A Lesson In Crime’, only
previously available as a bonus track on the
Japanese version of the debut EP. EXCLUSIVE to
this CD, a RAC remix for ‘Be Good’: still
including the lively, oft repeated “Hey!”s and
furious hand-claps so known and loved, while
somehow making a stellar track even more
pop-worthy. The award winning video for ‘Cheer It
On’, as well as that of ‘Nature of the
Experiment’ and MTV2/MTVUs pet, ‘Citizens of
Tomorrow’ are all physically available on Smith
for the first time.

Release Notes
Elephant Shell delivers on every bit of promise in Tokyo Police Clubs
rapid-fire barrage of material to date. The opening one-two of
Centennial and In A Cave barely evaporates before Graves and
Juno pack innumerable hooks and what-does-that-remind-me-of glimmers
into meager 2-minute-and-change frameworks, while Tessellate and
Sixties Remake encapsulate everything great about the manic TPC live
experience: soaring guitar signatures and keyboard figures, driving
backbeats and irresistible singalongs abound.
Download
Video
2007 - Cheer It On.avi Download
2008 - Graves.mov Download
2008 - In A Cave.mov Download

freezed for a while
im leet cause im hot, you aint cause you not