Black Sabbath bid the world farewell when their The End tour concluded in 2017, but that doesn't mean a one-off show is entirely out of the realm of possibility. Bassist Geezer Butler doesn't necessarily think a reunion will happen, but he isn't completely ruling it out either.

“If it came up I wouldn’t say never. I can’t imagine it ever happening, but then I said that about the Sabbath tour, and it happened, so who am I to know?” Butler told Classic Rock magazine.

Though the bassist hasn't spoken to Ozzy Osbourne himself, he still has contact with other members of the band. “I’ve seen Tony [Iommi] and Bill [Ward] at a couple of awards things we’ve done, and me and Tony stay in touch through emails, but that’s about it. But it’s good between us. It’s like having brothers. You don’t have to be in touch.”

But that didn't stop the musician from making the public announcement July 2 regarding his willingness to perform in Sabbath's classic lineup again, even though Ozzy drummer Tommy Clufetos manned the kit during the group's last tour in 2017, and Prophets of Rage's Brad Wilk recorded drums on final Black Sabbath album 13. Watch Ward's video down toward the bottom of this post.

Black Sabbath wrote the book on heavy, and their first decade’s worth of albums represent the Old Testament in the book of metal. From the clanging opening chords of “Black Sabbath” and lumbering siren’s call of “War Pigs” to the demon’s cry of “Sabbath Bloody Sabbath” and proto-thrash riffs of “Symptom of the Universe,” the Iron Man laid the blueprint for the genre on their first eight albums.

Those LPs will now make up a new vinyl-only box set, The Vinyl Collection 1970 – 1978, which is due out September 6th. And because die-hard Sabbaholics likely already own the band’s canon, the group is including a reproduction of “Evil Woman” seven-inch (backed with “Wicked World”) and a new 12-inch compilation of their mono singles, dubbed Monomania (a pun off their Sabotage deep cut “Megalomania”), which includes two previously unreleased mixes. The set will be available only as a numbered collector’s edition, limited to 3,000 copies.

Former Black Sabbath drummer Bill Ward was so moved by the resilience of victims of the 2017 Las Vegas shooting at the Route 91 festival that he wrote a folk song, “Arrows” in their honor. He recorded it with his Bill Ward Band. The song’s release coincides with the second anniversary of the shooting.

“Bless the youth, for realizing they could hear the truth,” he sings over strummed acoustic guitar. “Bless the man, who sought to love but fell with his demons/Bless us all, for surely, surely, surely we have cried.” It picks up when the band kicks in, and Ward sings, “Never again shall we shoot all our arrows to kill,” over a fluttering, prog-rock guitar riff.

“In the evening of October 1st, 2017, there was a mass shooting in Las Vegas,” Ward said in a video, released on Instagram. “What we’re going to do on October 1st, 2019 is we’re gonna release a song that I hope will be supportive. To me, it’s kind of like laying a wreath and sending the very best to everybody and wishing everybody well, the injured. It’s just a way of saying we’re very sorry that all those things happened and that we honor those who are not with us today. It’s a very solemn gesture, but, at the same time, I’ve written a song that I hope can bring some solace and good things to those that are still working through that particular shooting and those particular issues that they encountered because of the shooting.”

Black Sabbath guitarist Tony Iommi offered up words of support to Metallica’s James Hetfield, who entered rehab for alcohol addiction last week. “My best out to James Hetfield,” Iommi tweeted. “You’ve done the right thing seeking help — I’m thinking of you, my friend, and wishing you all the very best on your recovery. Looking forward to seeing you back at your best very soon.” He signed it, “Your pal, Tony.”

Iommi has been open over the years about his own struggles with addiction. In a 2016 interview with Classic Rock, he said he felt he was someone who could manage his compulsions but that others might have called him an addict. “I had a bash at doing a lot of coke, I must say,” he said, adding that he would sometimes do two or three grams a night. “I used to like doing coke, but then it went against me. It started making me feel worse rather than better. I got more paranoid. So I cut down and then I stopped.” 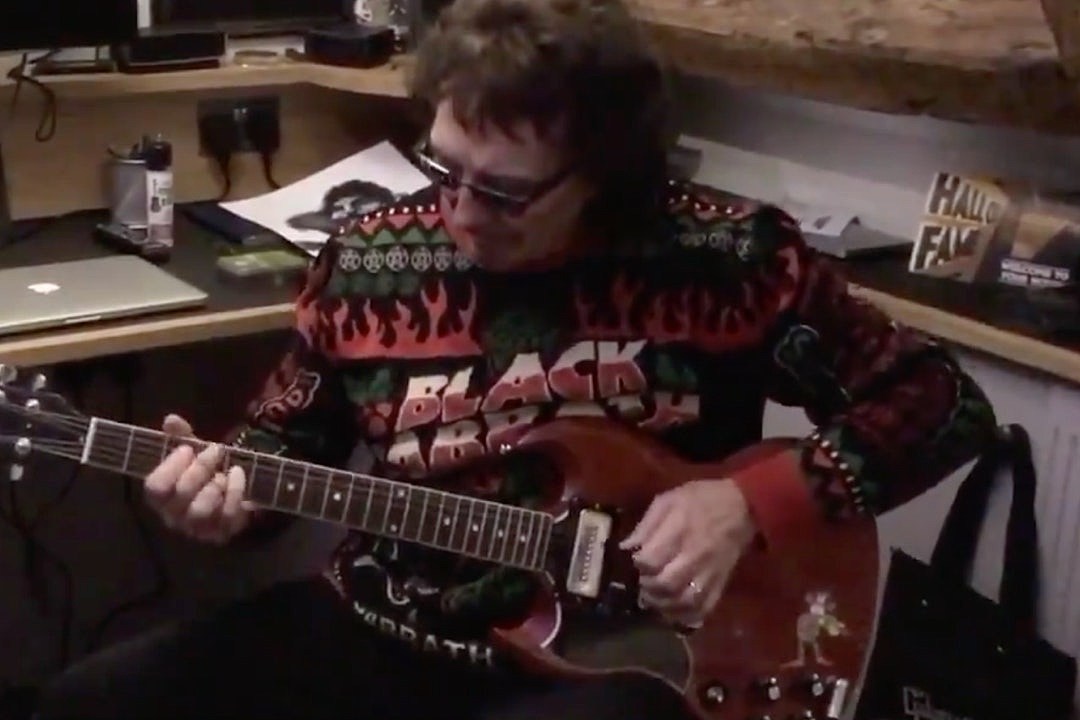 When Black Sabbath entered the studio to record their monumental first album in 1969, guitarist Tony Iommi faced a serious setback early in the session.

After tracking the first song, “Wicked World,” the pickup went out on his favorite guitar, a Fender Stratocaster he’d heavily modified to accommodate the thimbles he had to wear on his fretting hand after he’d lost his fingertips in a freak industrial accident. “In them days, you couldn’t go, ‘Oh, I’ll go and get another one from the guitar shop,’ or get somebody to bring one over,” Iommi tells Rolling Stone. “They didn’t do it like that.” So he picked up his standby guitar, a red Gibson SG.

“Because we were in for only the day to record, I had to use the Gibson,” he says. “I thought, ‘Oh, no. It’s just typical.’ ” He laughs. “But I had worked on the Gibson a bit, so it felt normal for me to play. So I ended up doing all the rest of the songs from the first album on the Gibson. And that was it. I never looked back. I just stuck with the Gibson then.” It became the instrument he’d use for much of the Seventies.

Now, Gibson has gone to painstaking lengths to recreate the instrument that defined Black Sabbath’s sound. The company claims that the Tony Iommi “Monkey” 1964 SG Special Replica, which will come out later this year, is an exact copy of the iconic instrument. Gibson reverse-engineered the instrument, studying its construction and aging, and mimicking details like its zero fret, “stop tailpiece brushings,” and, of course, the primate decal that gives it its name. The pickups were handmade by an apprentice of the late pickup guru John Birch, with whom Iommi had collaborated.

“It’s an exact, exact replica of my first Gibson, the red one, which I had on the first four albums,” Iommi says. “I’m really amazed how they’d done it.”

Iommi says that the instrument gave him a thicker sound on the first record — it originally had stock P-90 pickups — and that as time went on, he customized it further, working with Birch. The replica reflects all of the modifications he made in the years since. “The guitar they’ve done now, I can’t tell the difference from the original one to the replica one,” Iommi says. “It’s just really great. I’ve got it in my bedroom now. That’s the one I’ve been playing every night. I get up and play for a bit, and I really like it.”

...Most of the chat centered on talk of Sabbath's emergence in the late '60s and early '70s, however. And Ozzy had no qualms when giving praise to his bandmates in the pioneering metal act. To wit, he specifically cited the contributions of bassist Geezer Butler and early drummer Bill Ward while commending Iommi.

"Geezer's a great, great lyricist. [As a bass player], no one can touch him," Ozzy laid out. "Bill, in his day, was a great drummer. Tony, he's always gonna be the greatest — no one's touching him."

He continued of Iommi, "He was the band, really. We were all part of the band, but he was the most irreplaceable one."

Going back to group's genesis, Ozzy looked back on a time when an early iteration of Jethro Tull nearly grabbed Iommi from Sabbath's grasp.

"We played with Jethro Tull, and Tony got offered the gig," Ozzy remembered. "And then I remember thinking, 'Oh no, he's gone now.' Because Tony was something else — I mean, he still is. There's nobody on the face of the earth that can come up with them riffs like him. He's great."

"People will [ask] me, 'Why did you always sing on the side of the stage?'" Ozzy explained. "I don't fucking know. I don't know. It's just fear, I suppose. Because Tony, he's one of the few people who could walk into this room right now and I would fucking feel, like, intimidated. He intimidates the fuck out of me — and he knows it."

Black Sabbath’s Debut: 5 Things We Learned About Its Creation and Cover Art

Black Sabbath changed the world of music 50 years ago this week with their genre-defining self-titled debut. To mark the occasion, Rolling Stone put together a comprehensive account of the record’s creation.

We spoke with 12 original sources, including the Black Sabbath’s guitarist Tony Iommi, bassist Geezer Butler, and drummer Bill Ward, and several of their collaborators and peers. Judas Priest’s Rob Halford recalled seeing the group when they were called Earth, Ten Years After’s Leo Lyons remembers the band opening up for them, and Status Quo’s Francis Rossi explained how all the bands at the time wanted to be “heavy.” We also tracked down the album’s cover designer, Keith Macmillan, and the mysterious woman in the woods, Louisa Livingstone, for their first-ever interviews about the album art. Heavy Metal, Year One: The Inside Story of Black Sabbath’s Groundbreaking Debut

Half a century since Ozzy Osbourne first bellowed, “What is this that stands before me?” the band and their collaborators look back on the album that kick-started a worldwide movement