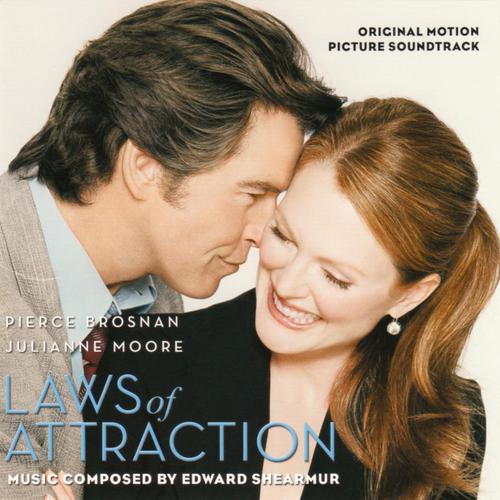 Laws of Attraction is a 2004 romantic comedy film directed by Peter Howitt, based on a story by Aline Brosh McKenna and screenplay by Robert Harling, Howitt and McKenna. It stars Pierce Brosnan and Julianne Moore. It grossed $17.8 million in the United States, on a budget of $32 million. Worldwide, it grossed over $30,000,000

High-powered divorce attorneys, Audrey Woods (Moore) and Daniel Rafferty (Brosnan) , have seen love gone wrong in all its worst case scenarios—so, how bad could their chances be? At the top of their respective games, Audrey and Daniel are a classic study in opposites. She practices law strictly by the book; he always manages to win by the seat of his pants or by "cheap theatrics" as Audrey says in one scene. But soon they are pitted against each other on opposite sides of a nasty public divorce between famous clients, with the case centering upon an Irish castle that each future divorcee has their sights set on. Audrey and Daniel travel to Ireland to chase down depositions, yet the two lawyers, who have been slowly developing a mutual attraction that neither wants to acknowledge, find themselves thrown together at a romantic Irish festival. After a night of wild celebrating, they wake up the next morning as husband and wife. Audrey is shocked but Daniel seems to be all normal. They return to New York and find their marriage news has been printed in a popular tabloid the next day. This is when Audrey decides that they should stay together to save their careers. But they are fighting the divorce case with the gusto they always had in the courtroom. Meanwhile they both start developing mutual attraction while staying together at Audrey's house. While disposing of garbage one day Daniel discovers some sensitive information about Audrey's client, which he spills accidentally in the next day's court proceedings. Audrey feels betrayed and asks for a divorce there and then, which Daniel agrees to give.

Their famous clients, meanwhile, go to Ireland to their castle, but they are not legally permitted to go there. Judge Abramovitz (Nora Dunn) sends their respective counselors (Audrey and Daniel) to Ireland to inform them that the law does not permit them to be in the castle till a proper settlement, i.e. division of assets, is done.

But to everybody's surprise the famous couple is reunited and it turns out that the priest who performed Audrey and Daniel's marriage was just a servant at the castle and not a priest, and the marriages he performed were just a part of the festival's celebration. They were anything but real.

Audrey and Daniel are shocked and Daniel returns to New York but Audrey follows him as she realizes that she has fallen in love with him. They have a court marriage at the end which is carried out by Judge Abramovitz.

Law of Attraction is one of the best ways to stay focused. It helps us to stay positive and boosts you up. Staying positive gives the power to charge yourself with positive vibes that can help in work, relationship, success, etc..