Oh, and on the off chance there are any astronomy aficionados amongst you, the North Star is that one.

collection of the greatest songs recorded by Frankie Valli & The Four Seasons. In posession of one of the greatest falsettos in the history of recorded music, Valli has enjoyed over five decades of success with both with The Four Seasons and as a solo artist, and this album is a fitting career overview. Includes the tracks 'Walk Like A Man', 'Working My Way Back To You' and 'Grease'.

Oh, and on the off chance there are any astronomy aficionados amongst you, the North Star is that one. 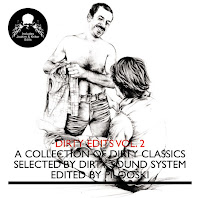 This second edits comp from Paris' dirty crew affirms that for Pilooski and friends, everything old is still new again. Unlike many re-editors, though, the dirty team doesn't limit itself to re-cutting gems from the fertile underground of dusty disco, and the breadth of material on Dirty Edits 2 shows just how wide they're capable of casting their net. Should this comp make its way into your hands, consider yourself well-armed: The next time you play host, you won't have to show off with a cultivated playlist. Simply let this thing roll from start to finish, as it represents a range of people-pleasers that don't resort to the lowest common denominator—never a mean feat.

While Pilooski and the dirty crew are adept at wielding the edit knife, the opening track is solid evidence that they also know when to leave well enough alone. Not a paw has been laid on the haunting, far-forgotten folk-funk tune "Glastonbury." It opens with an incantatory druid melody that suddenly sprouts a deeply funky drum backing, a brazen genre-bend that sounds like James Brown doing "The Wicker Man." If the track didn't have the word "reissue" stamped on it, you'd be forgiven for thinking it a mash-up.

Its fascinating hybrid form is a precursor to the past-present re-edits time warp that gets fully inaugurated once a loud 808 thump suddenly materializes beneath the deep bayou groove of Elvis Presley's "Crawfish." Lyrics-wise, the image of procuring such a creature from its muddy shelter and then preparing it for dinner doesn't seem terribly different from the process of digging up a bunch of lost sonic delights and dicing them up for today's palettes. Here, the recipe seems to involve sprinkles of lightly descending phaseshift and shining loops of harp glissando.

Later, Pilooski cohort Joakim cuts J.J. Cale's "Ride My High" into enough of a dreamy up-tempo breezer that you can see how psych-rockers like Spiritualized once got so blissed out on the blues—having pulled off a similar transformation of J.J.'s "They Call Me the Breeze" way back on Lazer Guided Melodies, while the compilation's second half delves into the '80s, with a steady medley of electro-infused tunes, the kind of slower-speed oddities that seem to indicate that—in dance music—it's kind of hard to be weird and fast at the same time. One of Pilooski's greatest talents is his remarkable ability to let a track build steam. His edits often chug, churn and throb forward like an approaching freight train. Yellow Power's "Hai Samurai" is a particularly striking example of this, a dense '80s electro-disco tune that slowly and steadily grows in pulsing intensity.

Pilooski's take on The The's "Giant," however, does more or less the opposite, taking a stripped-down approach to a synth-pop groove that's allowed to ride out unperturbed before climaxing in a syncopated drum burst. And then, in a bit of fresh air after a long spell of deep and wonky weirdness, the final track brings us back to a final fresh-faced soul-stomp, an edit of Del Shannon's "Gemini." Along with "Crawfish" it's one of the standouts here, marrying a lovely minor-key ditty to a powerful, Gary-Glitter-style stadium shuffle, a joyous curtain-closer.

http://rapidshare.com/files/101977606/pilo...k.rar.html-This link is broken, can somebody please re-up this release? I'm really just after track 2 if anyone has?

перезалейте вол 2 люди добрые (куда угодно)... спасибо заранее
Music is everybody's possession. It's only publishers who think that people own it.

Any chance anyone could up Dirty Edits Vol1 and 2 please?

Сам трек есть у кого?
You can stand under my umbrella.